So my GSP is all grown up now. He´s become a very nice companion, who is laid back at home, in the car - but on fire on the hunting grounds. He will point steadily, has an explosive avancé at best, but does run in and go for a happy retrieve. All of the above a combination of successful breeding and crappy training by me. But I will get meat on the table, if I shoot well.

He´s all around healthy, no allergies, never had a serious limp, nor wounds. Even his tail has been in tact - so all in all, whatever qualities he is missing - probably my own fault because of inproper and lack of training. He´s now turning 5 years, so hopefully many years still ahead of us.

8 days duck hunting, the past 2 days pheasant hunting. I have one tired GSP lying on the couch with all legs up in the air... But the minute I start cooking...

Our annual season start went well. I must say, I was quite happy with Luppo. He is quite reliable partner, be it fetching a bird gone missing on water, or waiting in a rowing boat. I will admit, he will make happy retrieves - but I am not bothered, he gets the job done. In any case, I would never shoot a bird in the water, so there´s really no risk.

Occasionally I sent him to search the water vegetation in front of us and he was very happy to be in the water. I have no idea if that will be the case, when the waters cool close to 0 degrees..

Pheasant hunting proved Luppo has the same pros and cons as before. He will make a great search - moves a lot and uses the wind. Steady point, but might hesitate if is not 100 % sure where the bird is, or is staring it right in the eye. Again, will run in - but does not try to keep he bird, but brings also birds he finds on his own to me. So I´ll admit - it does not go as it should in a hunt test. But he will get the job done. Which matters - I don´t have to think twice!

Luppo has matured, Luppo has matured!! All of a sudden he is showing some sensible behavior, he´s calm and in co-operation! It´s not just my imagination - we have 4/5 points from the water test to prove it - and successful retrieves in the beginning of the season. He has lots of legs, so he will run like hell, but he has a good nose, too. Also water is no obstacle, he swims well and with pleasure.

During the opening weekend of this season Luppo proved he can wait patiently, he did not even run in, when I downed a bird. Well, let´s see what happens, when we proceed with upland game. I´ll keep you posted!

Dec 29, 2015
Ups and downs - that´s life with dogs alright. I have run Luppo in three hunt tests since my last update, and so far we have a 3rd prize and two fails in the beginners class. He has a good nose and he points well - even if at times not directly the birds, but rather the scent area of it. Avancé has been both good and bad, Luppo is a careful dog, he messed up in a test by barging into a flock of birds and that has had a toll on his avancé - not so fierce and straight forward as before. Our biggest problem however is him running in. Big time :(
Well, we still have two months left for this hunting season, I just have to make good use of it. Nothing comes for free - the dog has already proven to be a good hunting dog, all of the mistakes he has made are trainable. So woman, go train your dog!!
Sep 6, 2015
5 water retrieves, 1 passed waterwork test and I have a GSP who has become quite a nice dog to live and work with. I was SO proud of Luppo on his first ever waterfowling trip to the seaside. He had to work from a boat and learn to wait - at first a challenge, but he very soon got the hang of it. During the weekend he had his first marks, first wounded bird - and I could see how he learned to watch the bird flocks - were they coming close enough for us to shoot.
After the hunting trip I entered and run him in a waterwork test. Looking at it with a background in the retriever world - it was ridiculously easy. No shooting, just a throw to the water. Luppo waited patiently until I gave him the permission to fetch the bird. He entered the water and swam well, got back to the shore - dropped the bird and shook himself. Damn! Then I asked him to come to me, he did but would not sit. And the on top of things he dropped again. So it was down to 3 points. Again - from my point of view, should have been a zero. But we´ll qualify to run in the real hunt tests - so I won´t bother with another test this year. Just need to practice more. The test report IN FINNISH is here.
July 13, 2015
So far Luppo has proven himself to have the looks & conformation of a proper German short haired pointer. But more importantly - he can swim well. All it took, was one training session with real game - and he was ready to swim however far he had to, to get that bird. Since that "discovery" he has done well with dummies too - even if he does lack the same enthusiasm, I was so used to with Nixon. Happy retrieves are a big no-no - so there is still work on that department, but on the bright side: he is slowly grasping the concept of not shaking himself before delivery.
I cannot wait for the autumn and the chance to let him do his job - he will run like the wind, his agility is just a delight to watch. I hope and I trust that he will keep his nose & head on the job, too - speed alone is never going to work :)
May 28,2015
Nearly a year ago he came, my first German short haired pointer (GSP) and it´s been interesting, to say the least. "Luppo" has been the easiest puppy I´ve ever had, but as soon as he grew himself legs, and lots of them, things changed. He takes a few leaps - and he is a mile from me. He is an enthusiastic hunter with a very good nose - so at this time he goes out on a leash. It is really the only way to make sure he does not disturb the nesting birds.
He can retrieve and will deliver sitting down, as is orthodox with this breed. He has yet to improve his swimming. He will go into the water very happily, but hesitates to go deeper - so a lot of daily work with that. Also, blind lines are also on his "yet to be learned" -list.
Losing Nixon was a terrible blow, with him I also lost the ever reliable retriever whom I could trust, whenever I had a dummy drifting too far for Luppo or Halti. So I´ve lost a few dummies after his passing...
Luppo has been a bit too active indoors - my favourite heels by Charles Jourdan - gone! My favourite fleece jacket - pocket gone! But at the end of the day, he´ll curl up in my lap - and it´s allright! My Gear: Benelli 828U Sport

It´s me and all mine! And no, you cannot use any pics! 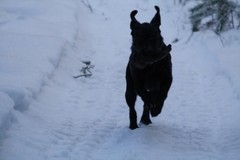 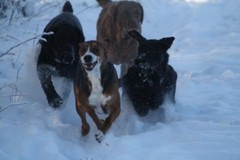